If you, or anyone in your household is unwell with COVID symptoms, or have undertaken a test for COVID, please keep your child at home until you have the outcome. If negative, they can return to school, if positive, they will need to isolate for 14 days.
C Follow us on Twitter opens in new window D Follow us on Facebook opens in new window
E search site
F translate page
G
Log in

Miss Densley, Mrs Hyde and Mrs Wright would like to welcome you to the fabulous Class 12!

Our year 5 and 6 pupils work hard for rewards all year and constantly impress us with their dedication, enthusiasm and work ethic. We work together to support each other in lessons and get the best out of every day.

Last term, we learnt all about Titus Salt, who was our Greatest Yorkshireman, the mining community of Barnsley, Macbeth and forces in science.

This term we are reading Harry Potter and writing in the style of J.K Rowling. We will also be looking at the impact of Plastic Pollution on our Oceans.

In science, we are learning about the Earth and Space.

We would love for you to take a look at everything we have got up to this year below.

We created 4 'oceans' and then poured oil over each of them, recreating an 'oil spillage'. We tried four different clean-up methods in order to try an extract as much oil from the beaches as possible. We were investigating which method would be the most effective.

>Making a Boom (A floating barrier places around the oil to contain it). We used plastic tubing to recreate this.

>Skimming the Oil off the Surface. We used syringes to withdraw oil from the water surface.

>Using a Chemical Dispersant. We used washing up liquid to break down the oil's constituents.

>Using sawdust to soak up the oil. We recreated this using cotton wool.

We had great fun investigating all of these different methods and hope you enjoy looking at all of our photos.

THE JOURNEY OF PLASTIC

During British Science week, we have been investigating the journey that plastic takes from oil to ocean which fits in nicely with our Literacy topic which is focussing on Plastic Pollution.

The children washed a synthetic fleece in warm water and then filtered the water through filter paper. They then analysed the filter paper under the microscope to see if there were any fibres left that could have come from the fleece.

Synthetic fabric is made from plastic and therefore even the smallest fibres can release harmful toxins into the ocean. These can then be consumed by fish and can cause death in some sea creatures.

We found that there were some fibres on the filter paper which had come from the fleece proving that, even a simple spin of the washing machine can be incredibly harmful to our environment.

Take a look at us using the microscope below.

To conclude our forces topic, we carried out an investigation to help us understand more about buoyancy. We designed our own investigation and created three tin foil boats in our groups. Each boat had a different characteristic which helped us to be able to test which was the best for carrying a heavy load across a body of water. The boat which held the most weight, would be the best! We tested the boats on water and recorded our results in a table which we designed ourselves. We had great sun with our investigation and we are ready now to move onto our new science topic of Earth and Space!

We learnt about the importance of saying 'No' online and who we should and should not share our personal information. We also learned about GDPR and how this can affect us.

On Thursday afternoon, the pupils of Class 12 took part in a dramatic interpretation of the 19th Century novel 'Silas Marner'. Everyone was involved, changing roles as the story moved on in time and place. The key characters of William, Silas, Sarah, Godfrey, Nancy, Eppie and the mystery woman were all played with confidence by our Y5/6s.

This novel explores complex themes of betrayal and redemption which the students tapped into quickly and with empathy. They were able to explore underlying issues through the drama and reach conclusions about motivation, cause and effect and life-changing decisions. There are several mysteries at the heart of the novel which everyone strove to unravel, aided by the sprinkling of clues.

Groups worked rapidly to construct tableaux which revealed the locals' attitude to the strange, solitary Silas. Individual children responded to prompts, made considered predictions and improvised the next steps in the story.

This work enriched the students' vocabulary, gave opportunity for in-depth discussion and encouraged them to make sensitive evaluations about character. At the end of the session, the pupils wrote a short letter, giving advice to Eppie, through which they demonstrated their understanding of the context of the novel and the nature of the characters.

After planning our investigation so that it had a dependent, independent and controlled variables, we then made our own parachutes. We made three different sizes, that were all squares, so that it was a fair test. We then took it in turns (in our groups) to test the parachutes that we had made. We found that the larger the surface area of the parachute, the slower it will fall. Therefore, making it safer for the passenger to land. There is more air resistance acting upon the falling object when the parachute is larger.

The heath. Bleak and wild.

We have enjoyed re-enacting two scenes from Macbeth today. We worked in groups of 5 and we each had our own role. There were 3 witches, Macbeth and Banquo in every group. We practised our lines and added movements to make it a real drama performance. Each group then performed their drama to the class. This will help us when we write the scenes as a narrative in Literacy.

Today in Literacy, the children had to work with their table to find and order events from the story of Macbeth. The children had already split the story up into important events in the previous lesson and now they had to order them one at a time. The children loved getting up and active with their learning and worked superbly in teams to help and support each other. The winning team, who found and ordered all the events the quickest was Table 4! Well done to Grace, Sophia, Elliott and Dalton! They were followed closely by Table 5 (Max, Josh, Aleise and Ashleigh) and Table 1 (Tyler, Max, Keira and Ellie).

We made our own witches masks out of modroc

The Young Shakespeare Company's performance of Macbeth helped us to understand the story before we begin our new topic in Literacy.

Analysing and designed a front cover for a Macbeth programme

This week, we have been learning all about remembrance day through poetry. We started by reading a range of poems that had been selected by The Royal British Legion for remembrance day. We read 'Death Is Nothing At All' written by Harry Scott Holland in 1910 and discussed how this poem relates to war and the loss of soldiers. We have learned about many different poetic devices from onomatopoeia to enjambment! We then tried to find these devices in the poems that we had read. Finally, we had a go at writing our own Remembrance Day poems. Take a look at some of our work below.

This morning, we have been joined by 4 ex miners who have dedicated their time to researching and raising money for the Oaks Colliery disaster which claimed 361 lives in 1866. It is the worst mining disaster to ever happen in England. These men felt that it was important for this disaster to be remembered and have worked together, along with many other volunteers, to create a Memorial Monument which is situated in Barnsley. During our History lessons, we will be learning more about the disaster and how it affected the community 152 years ago. On 12th December, a service will be held to remember all the miners who died and we hope to attend with some of our work to help contribute to the memory of the miners.

We know where the colon goes! 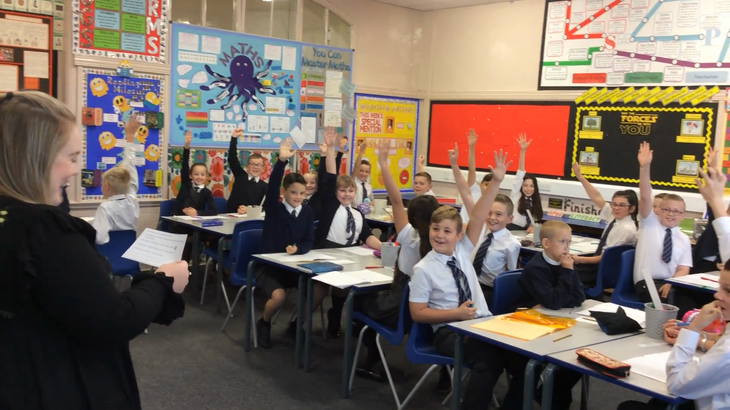 Whilst the Year 5 children have been enjoying a day at the National Coal Mining Museum, the Year 6s have been celebrating National Poetry Day. They started the day by reading a range of different poems and then went on to find out how different poems can be performed. The children then split off into groups and worked on their own performance of 'In Flanders Fields'. The final performances were amazing and each and every one of you did a great job! Well done! 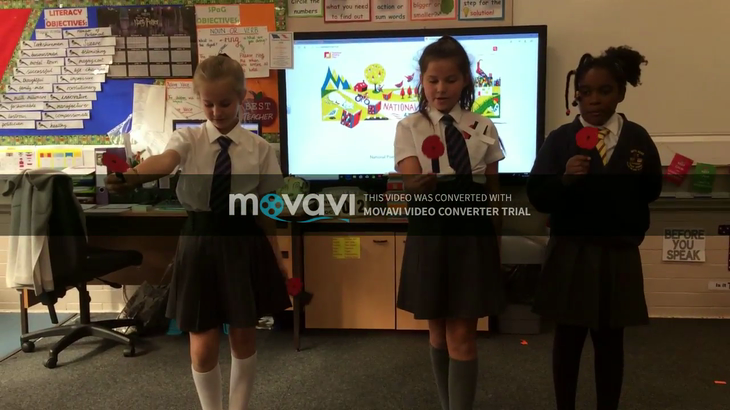 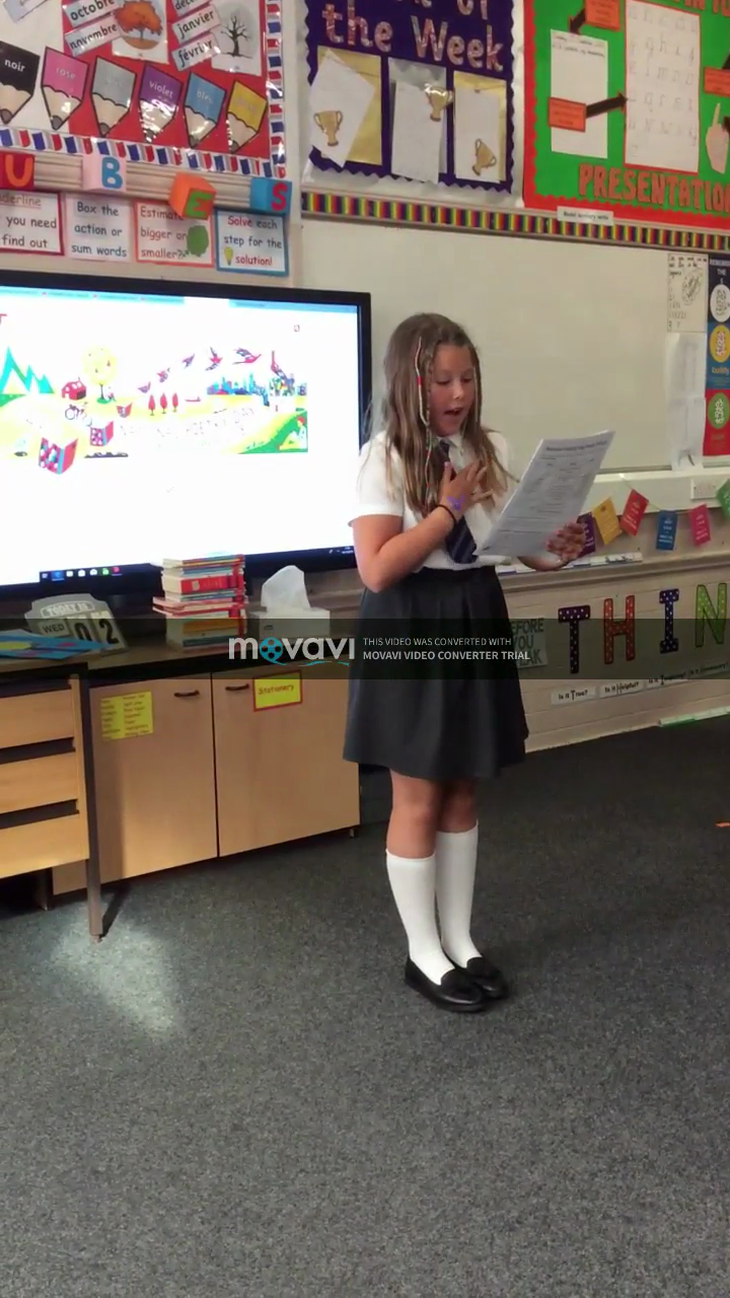 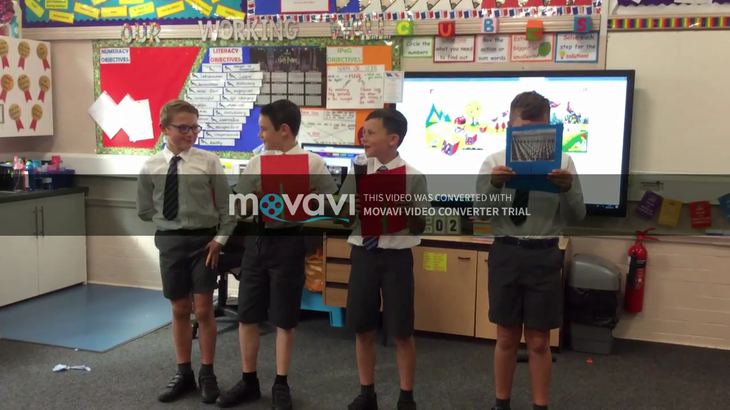 Classes 11 and 12 had a brilliant opportunity to plan their own radio show today. They worked in small groups to decide who their ideal audience would be as well as what music they would play. The children had a target of £2,500 to make during their show and they could do this through selling advertising slots. The children also had the opportunity to get a national DJ to appear on their show. Once the children had spent the day building their brand, they presented their show to the three judges (Mr Harris, Mrs Brookes and Miss Densley) who scored each of the groups on a range of things from their presenting skills to their financial strategy. All the children did so well and put forward some brilliant ideas and concepts. The winning team will now prepare for the final where they will compete against other schools to hopefully be named the overall winner! Have a look at some of the photos of the day below.

We believe that Titus Salt is Yorkshire's Greatest and we presented all of our information this morning to the governors and the rest of KS2.

I am so proud of every single one of you for having a speaking part. A super effort to win 3rd place against some really tough opponents. We have been learning all about Titus Salt in Literacy this week to prepare for the Greatest Yorkshire Person assembly to the governors next week. Today, we looked at Salt's great achievements in his life that make him the greatest! The children identified the most important 9 achievements of Salt's life and then put them into a diamond 9. At the top of the diamond were the achievements that they thought were the most important and at the bottom, were the least. The children used their speaking and listening skills to argue which achievements should be placed at the bottom or at the top of the diamond.